In the former post, I believe you guys can access to/from the two airports, and can travel across the metro Tokyo area. 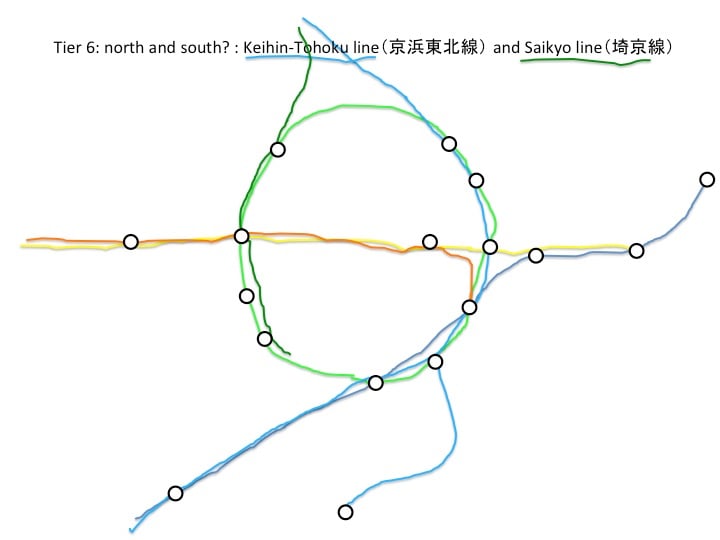 A lot of business people need to live not in metro Tokyo area, rather than in suburbs.  So much neccesity evolved to establish train lines to/from the north and the south.

Keihin-Tohoku line (displayed in cyan) is one of them.  They runs from the north to the south (off course, vise versa).  Also off course, they hop several station compared to Yamanote(light green) line.  The line is valuable is you want to go especially the south, like Yokohama and Kawasaki.

Saikyo line(deep green line) is another choice.  Saikyo means the mixture of Saitama and Tokyo, so you can imagine where the line runs.  Off course, the purpose of the train is to carry a lot of bussinessperson to/from Saitama to Tokyo central.  If you want to visita Saitama prefecture, this line is a choice. 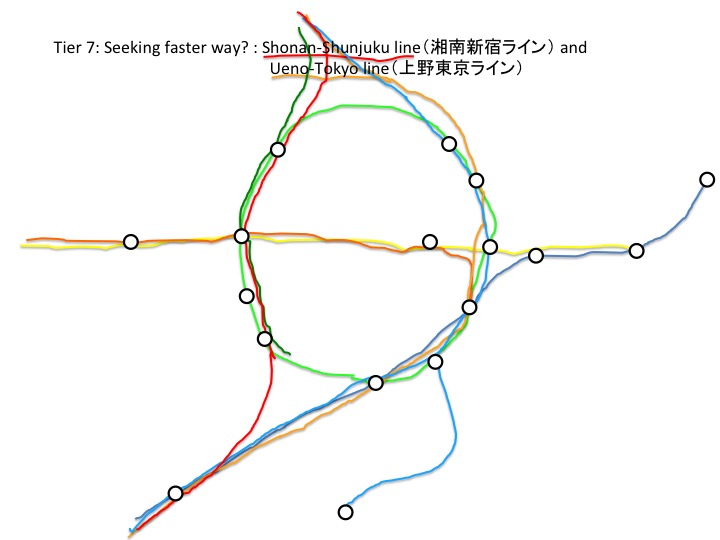 I am sorry I do not use these lines as usual.

In the JR era (after 1987, before the year, these lines had been operated by Japan Government), a lot of new “RAIN (=lines)” had beed established because of the business in commuter trains.  These two lines had been born based on there needs.  These line run to/from the north from/to the south, sharing the same stations and hops some stations.

Ueno station has been famous for the starting point for the northern Japan, such as Sendai, Aomori and so on. 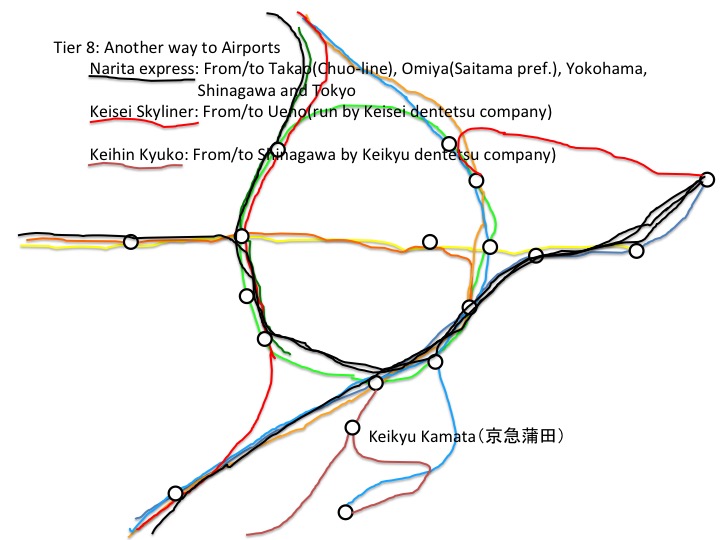 N’ex or Narita expresses are the express trains especially for those who want to go to/come from Narita airport.  JR made a lot of originating stations, such as Takao, Omiya, Yokohama, Shinagawa and Tokyo.  Even they stop at Shinjuku station.  You can see JR uses special train for N’ex, so it is easy to see what N’ex.  Simply, the express trains run by JR to Narita airport are Narita express.

All seats on N’ex are reserved.  HOWEVER, IF YOU MISSED TRAIN AND/OR THE TRAINS ARE DELAYED OR SUSPENDED BY ANY REASONS, YOU CAN TAKE THE EARLIEST N’EX TRAIN TO/FROM THE AIRPORT WITHOUT THE SEATS(OR USE EMPTY SEATS) USING YOUR ORIGINAL TICKET.  Don’t wait for your reserved trains/seats if the train delayed a lot (mainly due to the weather issue…  I believe the punctuality of trains in Japan haha).  I checked this in several official JR websites.

Another private companies, such as Keisei（京成）and Keikyu（京急）manage trains to/from Narita and Haneda respectively.

(The bottom line is to use Google map.  It is SO useful to utilize the metro in Tokyo)

Enjoy your stay in Tokyo.  Hope you guys meet me somewhere in Japan.

# I am currentry working on the additional part of this post.  Keep tuned!  IMHO, JR system is pretty easy and understandable, however, metro system is too difficult to explain.  Feel free to contact me if you are in trouble.  Thanks!

In the Tokyo area, the public transportation system is extremely efficient. More than 20 seconds of delay is regarded as “delay,” and all trains run in time within 15seconds of the time window. At the same time, the railway matrix is too complicate to understand even if you are a native Japanese speaker. When I visit Akihabara area to buy some electronics materials, I always see a lot of foreign people are standing in front of a ticket vending machine to look for their destination.
So I will try to dissect Tokyo railway systems and explain all of you. Please Feel free to ask me your questions and let me know your ideas.

The easiest way is to buy a prepaid card such as Suica or Pasmo. These two cards are almost identical. Only the difference is the issuer. You can get Suica card at JR station, Pasmo card at subway and private company’s train station. If you don’t like to purchase any of these cards and try to buy tickets by cash, it is tough to find the correct fare to your destination. If you are not sure after a few minutes’ struggling, you can purchase the cheapest ticket and go through the gate, and go to the destination directly. You can pay the rest of the fare at the side of the exit of your destination station (by vending machines or in person.) However, if you need to change trains to different companies, you need to pay each gate at the exit.
We will begin with JR lines and other trains bound for two airports in the Tokyo area. I am thinking to add subways. However, subways network is too complicated to explain. Stay tuned to update the page. Thanks!

Tier 1: begin with a clock 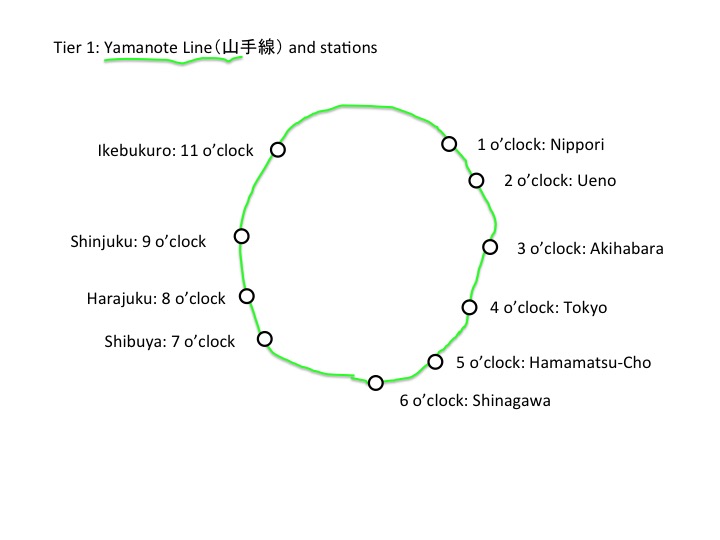 At first, draw a circle in green and put some station names.  I believe these stations are very important for tourists.  Basically you can trip wherever around Tokyo area by using Yamanote line. 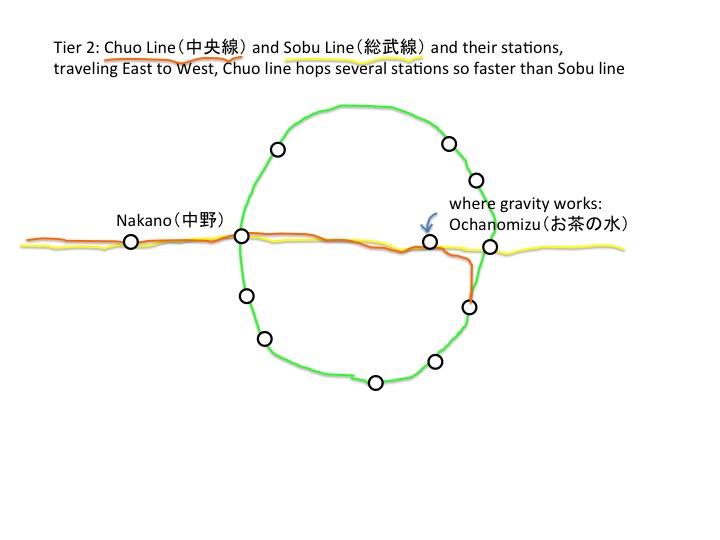 Edit: add comments about Mitaka station, where Ghibli museum is.

Tier 3: want to go to Narita and Yokohama?? 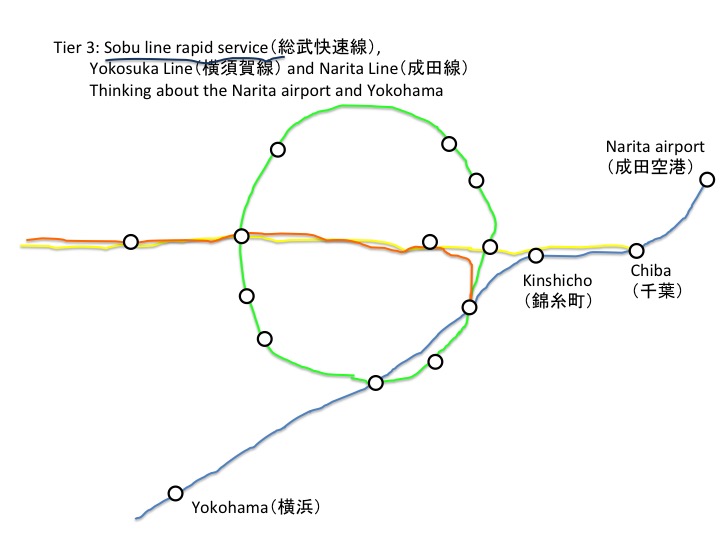 Drawn a blue line from top-right to down-left, named Sobu line rapid service.  Shares the same route with yellow(Sobu) line and separated at Kinshicho station.  This is rapid service – so you will pass several stations.  It stops at Tokyo station (again, 4′), Shinagawa (6′), then towards Yokohama station. 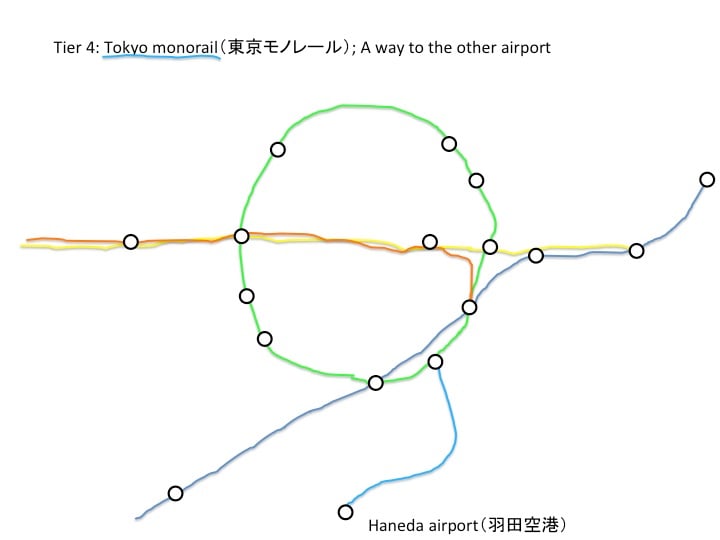 You can take a monorail from Hamamatsucho(5′).

to be continued if you give me a feedback…

Thanks for reaching out and sending us your Levi’s for review. First off, sorry for any problems you may have had with our garments. We try our best to make products that last, but this time we fell short. We promise to do better next time.

In the meantime, we’ve taken a look at your garments and have requested a replacement to be sent to you. You should receive a package from us within three weeks.